For the Love of A Good Woman

Twenty one years ago, I arrived at L'Arche Cape Breton on the East Coast of Canada.  I was 22 and I had lots of experience with people with disabilities.  I had been living on my own and fancied myself a pretty good cook.  I had a university degree in psychology and plenty of confidence in my own abilities.

I was welcomed to Asha House by the incredible Cariosa Kilcommons, and many other lovely people who were delighted by my arrival and who did all they could to make me feel welcomed and at home.

And then there was Mary.

I was terrified of Mary, and with good reason.  Born deaf and with Down syndrome, Mary was the youngest of 13 children.  When both her parents died suddenly within a span of just a few months, Mary's older siblings all went to live with aunts and uncles around the province.  But Mary was sent to live in a local institution for people with disabilities.  She was three years old.  She lived in that awful place for 31 years.

With her age and her disabilities, Mary had to find a way to survive institutional life.  And survive she did - with a vengeance.  It was during these years that she earned the nickname Bomber - as in explosions.  The moniker was well-deserved, as I dare say many would have rathered diffuse an actual bomb than face one of Mary's explosions.

Bomber came to L'Arche in the very early days of the community, a time when our founder's philosophy was to never welcome anyone bigger than him.  That way, he figured, he'd always be able to keep things under control.  Let's just say Bomber blew a big hole in that philosophy.

So, there I was, thrilled to be at L'Arche but terrified of Mary.  And so God, in her infinite wisdom, decided that Bomber and I should be roommates.

This little woman - who couldn't read or write, had never gone to school, had no family experience to speak of, and who would certainly never be a mother - this little woman raised me.  She raised me from a cocky, naive kid who thought she knew everything into a slightly less cocky, slightly less naive woman who is quite certain I don't know anything.  I could write a book about the lessons I learned from Bomber, but in the interest of brevity I'll stick to just a few highlights.

St. Augustine says that only three things are needed to be saved - humility, humility, and humility.  If this is the case, then I can thank Mary for my salvation.  Bomber taught me to be humble.  If she could speak, she most certainly would have said (over and over) "You're not the boss of me!"  And I wasn't.  Bomber sat where she wanted, wore what she wanted, ate what she wanted, and went where she wanted.  And she did it all at her own pace (which was excruciatingly slow!).  She forced me to let go of my need to be in control, and to accept my own powerlessness.

Bomber also taught me to stand my ground.  She showed me that even someone with a story like hers - a story of loss and and weakness and abuse and abandonment - even someone with her story can take a stand, and people will listen.  In our province, the government decides who can and cannot live at L'Arche.  When people get older and their needs change, they can be moved, against their will and the will of their family and the community - to nursing homes.  Bomber was old and sick, and the powers that be decided she would be better off in a nursing home.  But she had already spent too many years in what David Hingsburger would call "the land of the long corridor", and she wasn't going back.  And so, on the day that her file was to be officially approved for nursing home care, Bomber died.  She died at home, in her own bed, surrounded by tearful friends.  Even the government wasn't the boss of her.

But most of all, and perhaps unexpectedly, Bomber taught me about tenderness.  About how to forgive someone seventy times seven times, about the need to show mercy to myself and to others.  Through all the conflicts, the tears, and the wounds (and they were not just figurative wounds), Bomber was always the one who came back to say "I'm sorry".  She always reminded me, signing with her arthritic little fingers, "You and me are friends".

But that's not the end of my story.  In my twenty one years at L'Arche, so much has changed.  I don't live in a L'Arche house anymore.  My roommate isn't Bomber anymore - it's my husband.  And we have four very noisy and very demanding kids.  A lot of the people who were my teachers in L'Arche have passed away.  And lot of my friends who are still around aren't too interested in coming to spend time with me, on account of those noisy, demanding kids!  And if I am truthful, over the past couple of years things haven't always been easy in my community, and that tenderness that Bomber taught me has hardened a little into a heart of stone.

I can't rely on my twenty year old story of transformation.

And then along came Barbie.

Barbie arrived in the community in June from a loving and supportive family.  Barbie loves chaos.  She loves dance music in the living room, unexpected things ("Surprise, surprise!" she often exclaims), iPads, and things that make noise when you press a button.  In other words, Barbie loves my house!

And Barbie's excited "Yes!" when I invite her over for supper, the way she runs from her house to my van when I come to pick her up, a goofy smile on her face, the way she is adding "Jenn" to her small arsenal of names - in all these ways Barbie is healing me.  She is replacing my heart of stone with a heart of flesh.

The 14th century mystic Julian of Norwich has been the source of much consolation for me over the years.  I will finish with words of hers that I think sum up what I have learned - and still need to learn - through my relationships in L'Arche. 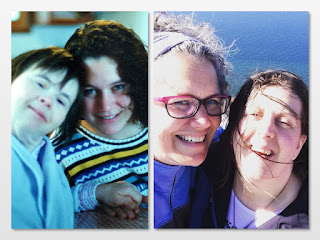 I love the name of your blog - there is possibility in disability. Your writing gives us permission to open up and be seen. I wonder if you have read Pema Chodron? “If we learn to open our hearts, anyone, including the people who drive us crazy, can be our teacher.”
― Pema Chödrön

Ohh Jenn Power what a wonderful painter of the stories you are, on top of being true and acurate they are amazingly full of life and carry the true images,history and character of the people you talk about! Thanks for sharing your gift through storytelling!

Mom
My living room window looks out over the beautiful Bras d'Or Lakes in western Cape Breton, and my mind's eye is always picturing my home community of Calvert, Newfoundland. Some of the threads that weave through my life are family, disability, faith, relationships, L'Arche, and how to cook a good molasses duff. I live a privileged existence and it is my life's journey to remember to begin and end each day in gratitude.